How do you describe the Ritchie Dave Porter sound and songbook? What characterizes your music philosophy?

The RDP sound is mostly rootsy solo acoustic blues that could be performed either on a stage, in a smoky bar, or on a wooden porch with fireflies dancing in the twilight hours. I feel acoustic blues songs such as ‘Lord Have Mercy’ and ‘When The Sun Don’t Shine’ are good examples of my sound and style. I like to rock out on my SG from time to time, and create instrumentals and blues rock songs depending on my mood and what I feel the song needs. My music philosophy is to write songs that are real about my own struggles and life adventures. I have to feel what I sing about.

What were the reasons that you started the Roots Blues folk series and experiments?

Quite simply because I play blues because I feel it, blues is real, and it’s heartfelt. I simply couldn’t play anything that I don’t feel in my heart. Blues guitar always felt natural to me, I’ve been playing blues guitar for 35 years and the older I got the more blues there was to play and sing about. I feel I belong in the blues, as the blues is home to me.

The journey of life has always been a lifelong path of Rock and Blues music for me ever since I was 11 years old and started playing the guitar. Jimi Hendrix and Jimmy Page and in particular the music of Led Zeppelin and Stevie Ray Vaughan changed everything for me as I was amazed by the beauty and skill and talent of Hendrix, Page and Stevie Ray Vaughan as both instrumentalists and Songwriters. The image, sound and variety that the music of Led Zeppelin made in particular was and is incredibly diverse and they made the music they believed in with feel and presence both Acoustic and Electric, which myself and Debra Susan also do. I have never been into chart-based pop music or anything like that as I grew up on the Blues and Rock and Hard Rock sounds of Hendrix, Led Zeppelin, Rolling Stones, Johnny Winter and people of this generation may be unaware that in the seventies it was guitar-based music that was huge, breaking stadium records everywhere despite mainstream pop music like ABBA and disco also being popular. No disco band ever played to 400,000 fans ever, but Led Zeppelin did. I liked the way Rock and Blues musicians lived and the stories of their antics are now legendary. Mick Jagger and Keith Richards are the epitome of Rock and roll as are Page and Plant or Tyler and Perry, with legendary lifestyle and timeless music that influenced so many of us to be ourselves and not live a conventional run of the mill life.

Where does your creative drive come from? What musicians have continued to inspire you and your music?

My creative drive comes from within. I live and breathe Rock and Blues guitar, I always have and always will. I sometimes awake with riffs and chord structures in my head ready to play and practice guitar daily without fail. The musicians that inspire me include The Rolling Stones, Led Zeppelin, Jimi Hendrix Experience, The Who, Stevie Ray Vaughan, Johnny Winter, Freddie King and Albert King and of course BB King and Queen.

I have grown and developed as a guitar player and artist over the years as I believe a true guitar player practices nonstop expressing their spirit through the instrument with an interest in and understanding of a variety of guitar styles such as Blues, Rock, jazz, folk or Spanish guitar to keep things interesting and exciting and fresh with ongoing active development. To not experiment with more than one musical genre only leads to stagnancy of the artist. For electric guitar the Telecaster is my favorite instrument as it feels perfect to play with a fabulous tone and overall sound great for the Blues, Rock, Blues Rock and our jazzy Blues.

Do you have any stories about the making of the new singles with Debra Susan which you’d like to share with us?

I invited Debra Susan over to my flat for coffee as we had been friends for some time, and I was aware that Debra was a classically trained opera singer also trained in music theatre. I started playing the riff and chords to ‘One Hell Of A Ride ‘ to Debra and asked Debra if she could put anything to it vocally. I was amazed that Debra immediately came up with both the lyrics and the melody to complement the riffs and chords I had written and before a few hours was up Debra had written all the lyrics and melody and our first debut single was complete and was recorded by Michael Tingle, released in December 2020 which was produced by Michael Tingle as have all our Blues based Rock singles since.

I feel as a guitarist I just play and write the riffs, solos, chord structures that feel good and express my spirit through my guitar. I never try to write anything to please anyone else or to be commercially successful as the way I see it if people dig it and enjoy it that’s a truly beautiful thing to be valued and appreciated.

What is the impact of Blues on the socio-cultural implications? How do you want to affect people?

I just love the way people enjoy our music and it’s great to feel appreciated by those that actively support our all-original songs which is fabulous. I have inspired people to either start playing guitar or play more guitar and that’s a truly beautiful thing to do.

Which meetings have been the most important experiences for you? What is the best advice ever given to you?

I met Robert Plant a couple of times and I didn’t say too much I was just really happy to play my blues in front of the Led Zeppelin front man at the Elbow Room in Birmingham UK in the 1990’s. I don’t actually follow anyone’s advice, I sing and play what I feel is right and I always follow my own gut instincts, people have tried to advise me on what to sing about and I will listen to what they say but I always ignore it because only I myself can express my own musical vision the way I want it to be.

Are there any memories from gigs, jams, open acts, and studio sessions which you would like to share with us?

Yes, I remember my jam sessions with my now deceased friend Bryan James and we had a very close friendship. Bryan was a tremendous guitarist and a very good friend and we use to watch each other play regularly and we would also go to gigs together checking out all the blues and rock bands.

What do you miss the most nowadays from the blues of the past? What are your hopes and fears for the future?

I miss the raw natural talent of Johnny Winter and the brilliance and soul of Stevie Ray Vaughn. I feel that a lot of modern blues rock sounds over produced, lacks raw energy and a lot of the guitars sound the same. I think too many modern blues rock players sound like a tribute band version of Gary Moore. My hopes and fears for the future are that I would like to hear more interesting original blues songs and more people that are guitarists play the acoustic blues because blues started out on acoustic guitar anyway and I like a clear natural sound without relying on effects pedals. My only fear at the moment is keeping up with my fans expectations for new material as I will not be rushed in my song writing at the cost of quality.

If you could change one thing in the musical world and it were to become a reality what would it be?

I would encourage the younger generation of today to stop listening to crap like Kanye West and Justine Bieber and open their hearts and souls to real musicianship and encourage them to download Jimi Hendrix ‘Are you experienced’.

What are the lines that connect the legacy of the 1960’s British blues boom with your generation?

The British blues legacy of the late 1960’s particularly the blues of Eric Clapton, Jimmy Page, and Jeff Beck in the Yardbirds and specifically Jimmy Page on the first two Led Zeppelin albums excited me and inspired me and made me want to play guitar. Hendrix was incredible and his talent and guitar work was and is a massive influence on me.

Why did you think that the British blues continues to generate such a devoted following?

There are so many great blues rock guitarists in the UK that were influenced by Hendrix, Page, Clapton and Jeff Beck and we all love those guys they were outstanding and amazing guitarists. Simply put British blues continues to generate such a devoted following because we have so much great blues music in the UK.

Let’s take a trip in the time machine where would you go if you could go anywhere?

I would defiantly go back in time to when Robert Johnson met the devil at the crossroads and I would like to see him shake the hand of the devil and become the devils guitarist. 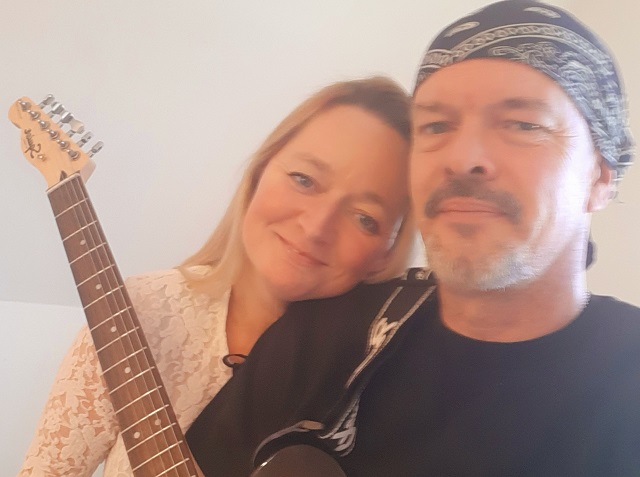 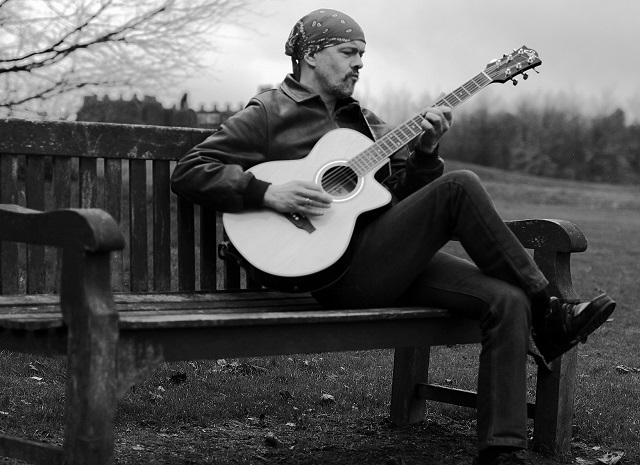