Slide Hampton, trombonist who also made a lasting impression as a master arranger, is dead at 89: Video, Photos

Slide Hampton was a trombonist, arranger, and composer with skills very few could match. He could take a small band and make it sound like an orchestra — not just in vastness, but in excitement, impression and intricate layers of sound.

His arrangements found the visceral core of bebop classics and revealed their stunning beauty and spine-tingling glory. When he raised his horn to solo, the results were always impressive: a deep mix of profound blues and complex technique. He was a true original.

Hampton died on Nov. 18 at his home in Orange, N.J. His son, Lamont Hampton, confirmed his death without providing a cause.

Though he never achieved the fame of J.J. Johnson, a formative influence, Hampton was revered as a modern jazz trombonist; in passing, critic Gary Giddins once proclaimed him “perhaps the most underrated bebop virtuoso soloist alive.” Nate Chinen, reviewing a Hampton concert for the New York Times in 2006, noted his “full and slightly foggy sound, warm and mellow even in the upper reaches of his range.”

But it was as an arranger, especially for big band, that Hampton received his proper due. His two Grammy Awards came in arranging categories: Best Jazz Arrangement Accompanying Vocalist(s), behind Dee Dee Bridgewater in 1997, and Best Instrumental Arrangement, for “Past Present & Future,” on an album with the Vanguard Jazz Orchestra in 2004.

Appraising the latter recording for the Village Voice, Francis Davis wrote: “As a composer and orchestrator, he’s far more conventional than Bob Brookmeyer — rather than voicing across sections, à la [Duke] Ellington or Gil Evans, he’ll pit brass against reeds in predictable fashion. But his charts swing like crazy, and few writers active today get as much color out of a handful of simple riffs or push soloists along with less fuss.”

The National Endowment for the Arts recognized Hampton as an NEA Jazz Master in 2005. This past June, the Jazz Foundation of America honored him with its Lifetime Achievement Award.

Lin continues: “His deep melodic statements, keen sense of harmony, and impeccable sense of time continues to amaze me, and I can’t listen to a single recording of him without feeling the need to practice myself.”

Alto saxophonist Todd Bashore, who met Hampton as a high school student, similarly attests to a lasting impression. “Slide is harmonically one of my biggest influences as an arranger,” Bashore reflects. “He is coming out of the bebop tradition but is so creative with how he reharmonizes things. The way he mixes some more modern polychords in with traditional bebop harmony always amazed me.”

Trombonist and composer Ryan Keberle, first worked with Hampton as a fellow educator: in 2003, appointed the first director of Jazz Band Classic, an outgrowth of New York Youth Symphony, he invited Hampton to be a guest soloist in a concert at Carnegie Hall. “I’ve never met a more humble, supportive, generous, and inspiring human being,” Keberle says. “And, of course, his trombone playing, compositional prowess, and expert arranging skills are something that continue to inspire me to this day and something I strive to emulate in my own music. I think about the lessons I’ve learned from Slide on a regular basis.”

In his own NEA Jazz Masters interview, conducted in 2007 by Molly Murphy, Hampton offered a reflection on the importance of weighing life experience as an artist. “The creativity is an important thing, but the expression is more important,” he said. “It doesn’t matter whether you are composing many notes, it just matters that those notes have a lot of meaning and that you express yourself individually in a way that makes the music have some effect on the people that are listening to it, including yourself.” 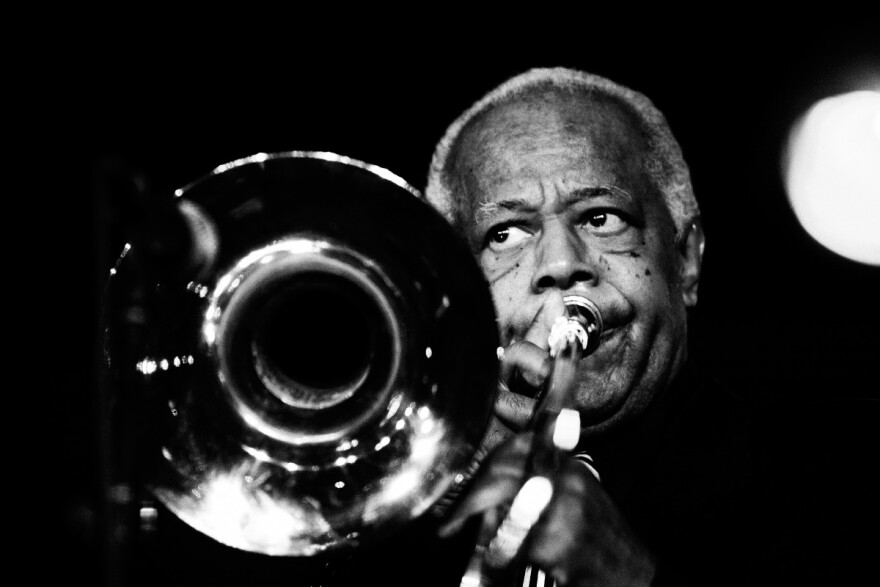